Konkokyo minister Alfred Tsuyuki performed the ceremony, scattering salt and rice paper confetti in front of the wooden altar honoring World War II detainees.  More than 2,500 Japanese and other citizens of foreign descent were held at the beginning of WWII, but little evidence of that episode is visible on what is now the present site of the Verdugo Hills Golf Course.  Only the oak trees remain. 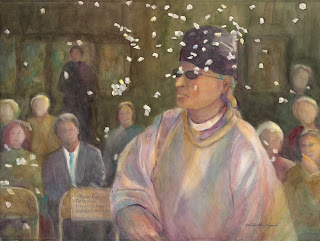 My mother was born in Santa Monica.  Her mother died after giving birth to her in 1916.  There was a pandemic flu which killed millions around the world. A few years later, when she was 3, her father died and she was sent to Japan to be raised by an aunt. She returned alone to America at the age of 21 and lived on Terminal Island. 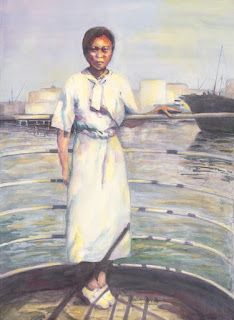 Posted by Hatsuko Mary Higuchi at 12:48 PM No comments:

I was asked to do some paintings for the Tule Lake Pilgrimage in 2016.  The theme was Hallowed Ground. As I thought about the theme, I  envisioned the grounds of the camps as a spiritual, haunted and ghost like, and the underground buried with layers of stories to tell.


HG1, names the gulag of concentration camps as if they were ready to be called out in a roll call. 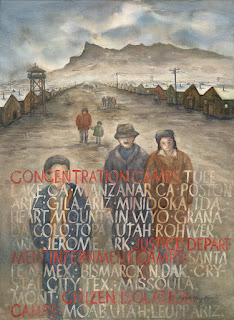 HG2, depicts the inmates lined up at the communal mess hall.  Lines to  eat, to use the shower, the latrines, movie night, and laundry rooms were a familiar sight, with approximately 8,000 to 20,0000 people incarcerated at each camp. The familiar sight of Tule Lake's iconic Castle Rock is prominent in the background. 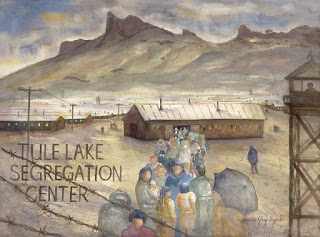 HG3,  A family looking out between the barbed wire, with their individual identity tags (which are made of acetate),  hanging from the fence.  They stand on Hallowed Ground, depicted with memories of the lives they left behind and the reasons they find themselves incarcerated at Tule Lake. 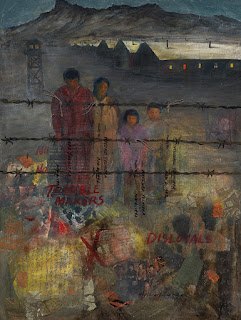 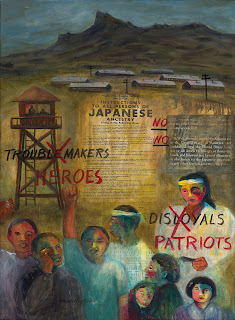 HG5, Despair:  Families were torn apart as discord surrounded them.  Pressures mounted from within and without family units, and pitted families and friends against each other. 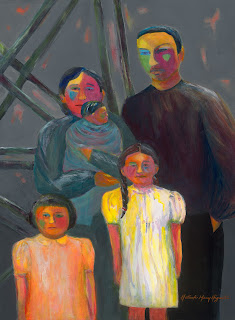 HG6, Tule Lake had 28 guard towers overlooking the troubled prison.  This was more than any of the other camps. 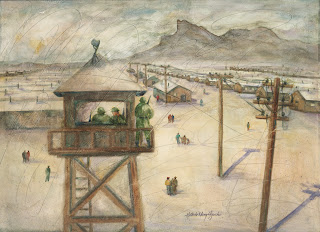 HG7, Survival. This painting depicts three Japanese cultural characteristics that comprised the survival mantra of Nikkei during and after the war:  "gaman" (be patient... endure the unendurable),  "shikataganai" (nothing can be done),  and "kodomo no tame ni" (for the sake of the children). 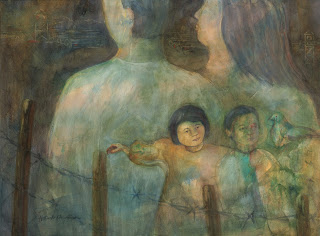 This painting of my family standing outside the Poston barracks shows my mother holding my brother, Tetsuo, born in camp along with my sister, Mitsuko, standing in the very front.  I'm on the left, with my hand in my mouth and my sister to my right.  Our playmate is on the far right . 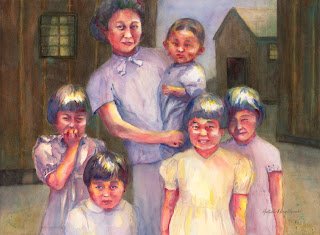 Posted by Hatsuko Mary Higuchi at 10:12 AM No comments:

She looked so dapper...

My mother, dressed in a dapper outfit for a Sunday drive, stands by a roadster.  I wonder who took her picture?  Who was the driver?   Could it have been a date? 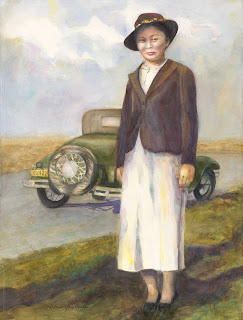 Posted by Hatsuko Mary Higuchi at 10:10 AM No comments:

My mother, second from the left, and her co-workers at the San Pedro Fish Cannery of Terminal Island, CA. 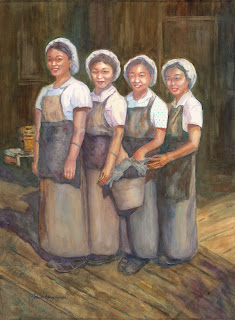 My mother, standing on the left, enjoying a day at the beach  with her friends on her day off.

In the photo below, she is enjoying the day with a group of friends.  She is standing in the back row, far right, holding a neighbor's child. 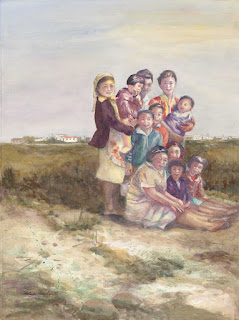 Posted by Hatsuko Mary Higuchi at 10:09 AM No comments:

The packer and shipper came to pick up 22 paintings for the Heart Mountain Wyoming Foundation and Interpretive Center.  I will have a one woman show from February to May 26. I have included 3 new paintings in that collection.  Series 32 is a 8"x 8" mixed media painting done on Masonite board.  It is a painting I did of Heart Mountain, the interpretive center, guard tower and hospital's red brick chimney. 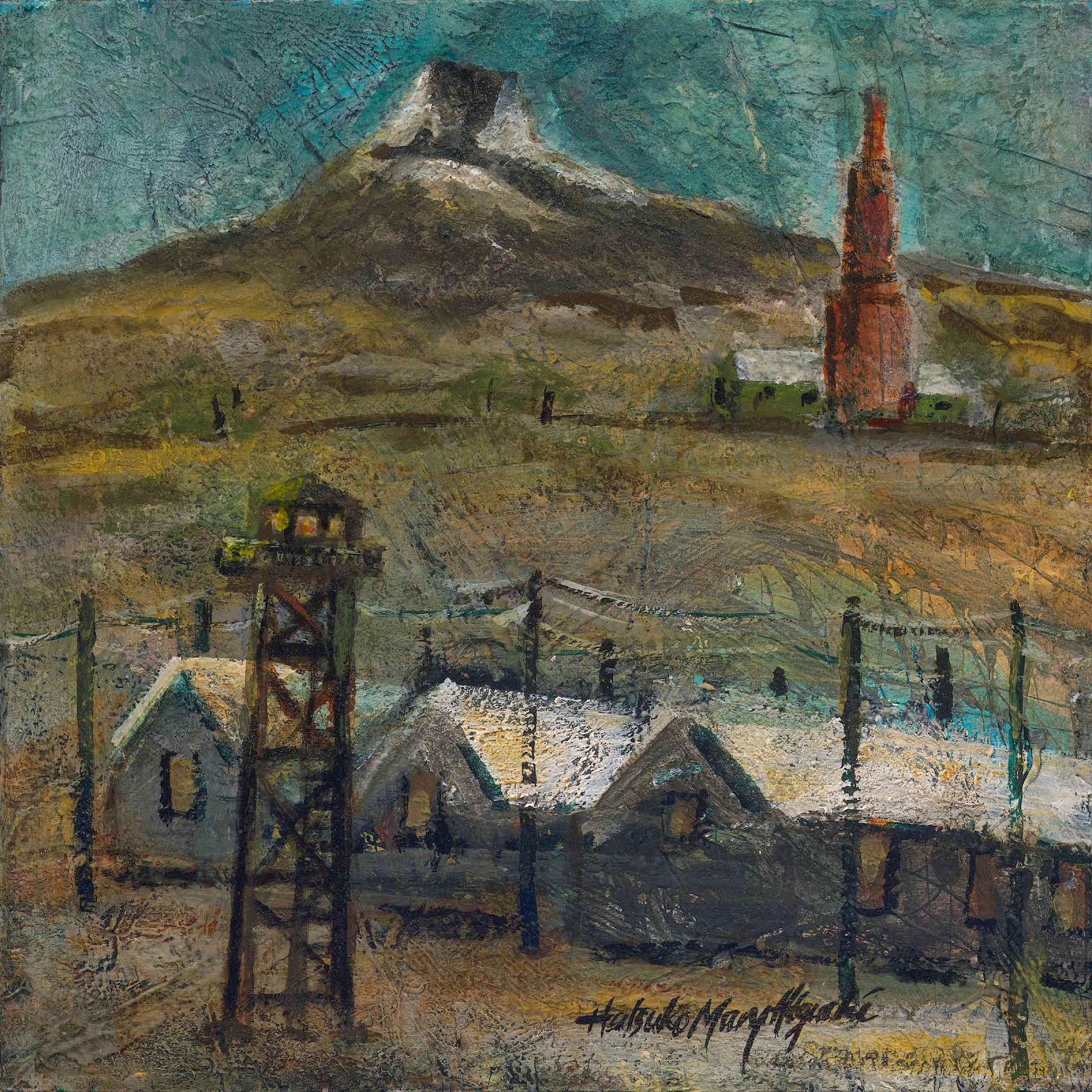 
The second painting, Turmoil at Heart Mountain. is an abstract painting, representing the resistance at Heart Mountain that challenged the constitutionality of their imprisonment and demanded freedom as a condition of their conscription into the U.S. Army. 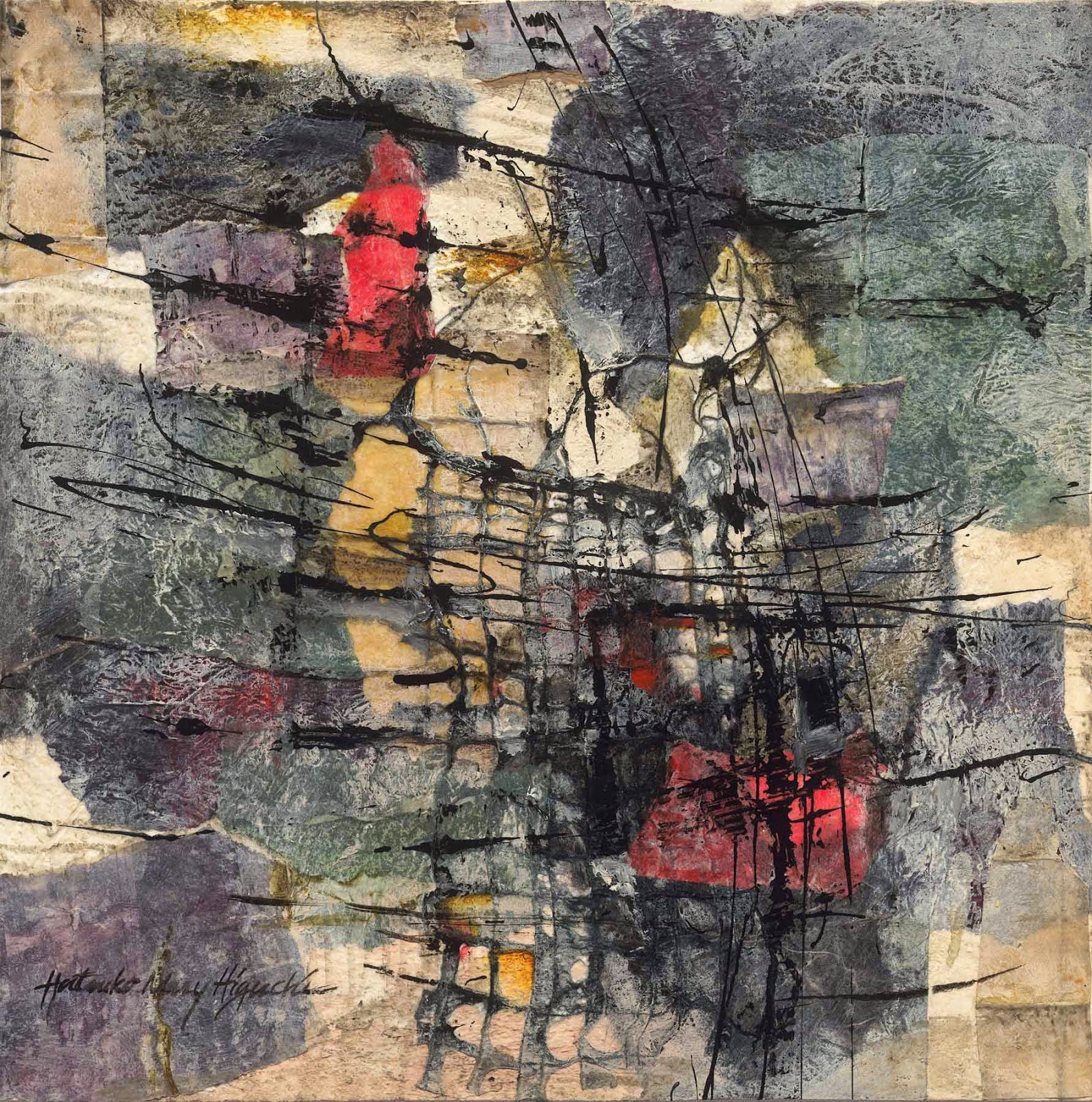 
The third painting titled Heart Mountain #2, features the iconic symbols of Heart Mountain--the mountain, the hospital with the red brick chimney, the guard tower and the interpretive center--are painted in big interlocking shapes. 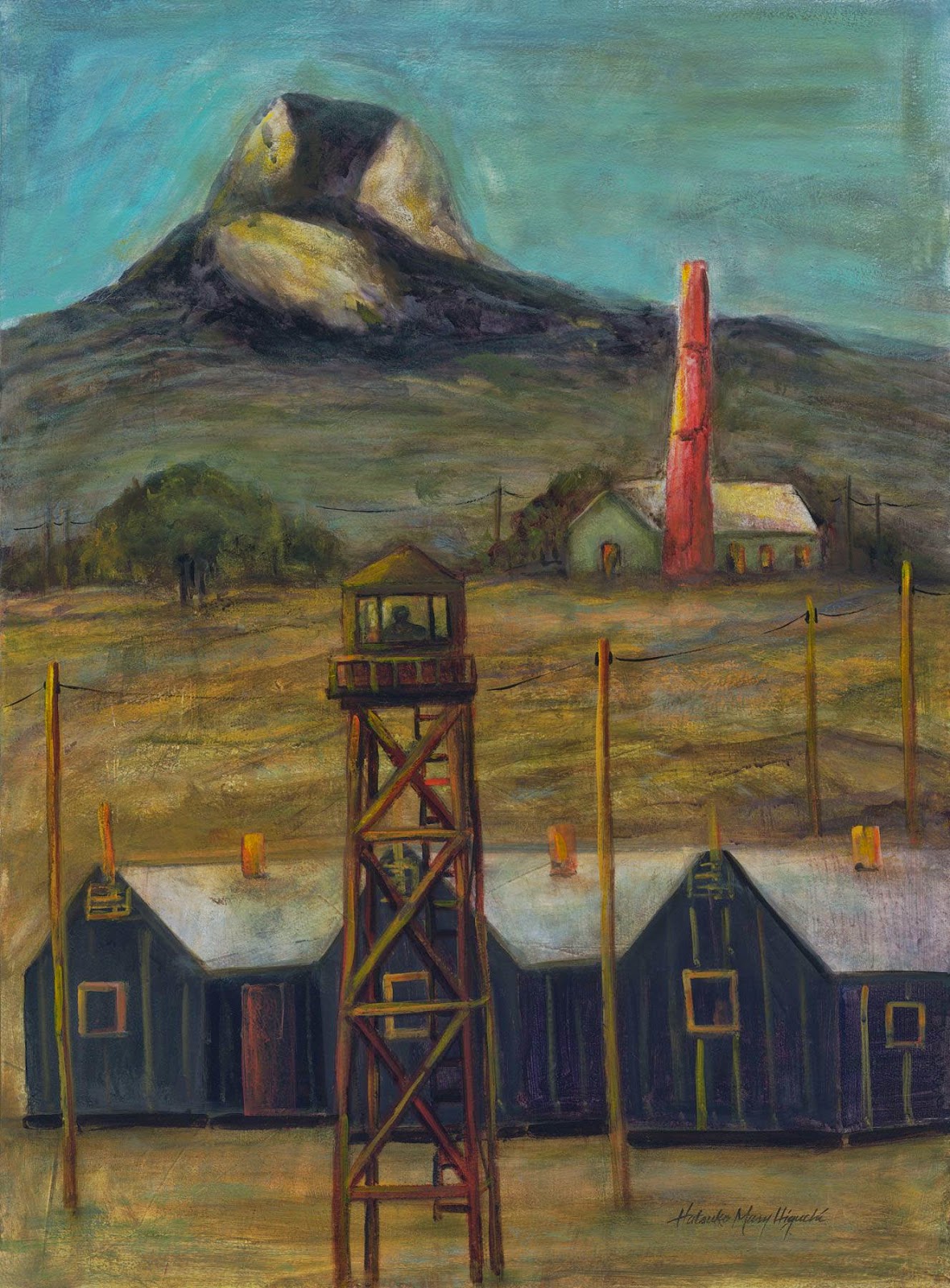 Hatsuko Mary Higuchi
Torrance, California
Hatsuko Mary Higuchi was born in Los Angeles in 1939. On February 19, 1942, President Franklin D. Roosevelt issued Executive Order 9066, which authorized the mass removal and incarceration of “all persons of Japanese ancestry” on the West Coast. Mary’s family was imprisoned in the U.S. War Relocation Authority’s Colorado River concentration camp at Poston, Arizona, 1942-1945. Mary Higuchi paints a variety of themes such as landscapes, figures, and abstracts. She uses watercolor, acrylic, mixed media, collage, and calligraphy. Her EO 9066 paintings depict faces with anonymous features or none at all, symbolizing the mass anonymity to which over 110,000 Americans of Japanese ancestry were reduced–denied due process and judged guilty solely by reason of their race. Mary Higuchi’s haunting portraits are a warning that what happened to Japanese Americans is a precedent for similar actions against other groups, unless we remember the lessons of the past. For more information, please click on the link to the left.